Hey everyone! As a team we have heard quite a few interesting rumors and some serious misinformation floating around that we wanted to clear up below. Thank you for reading!

##The Origins of Path of Titans

The core of our development team relocated to Australia from the US and Canada originally to develop Breaking Point, an open world survival shooter that has been in the early stages of development since 2016 and has existed as a mod concept since 2013. The scope of the game was very large with a massive map and complex game mechanics, and we refused to pursue any publisher agreements for fear of losing any control of a concept that was very dear to us. As we pushed further down the development path, we began to realize that neither time nor resources were on our side and that something was going to need to change in order for us to avoid putting all of our efforts into something we would not be able to finish. After a break during the holidays, our lead artist and resident hardcore dinosaur enthusiast Rebecca Slater (Jiggy) proposed a much smaller and more realistic concept which after several meetings became Path of Titans. A number of wonderful artists within the dinosaur community came on board to help us, and Jiggy started straight away with modeling our dinosaurs (check out the VODs on https://www.twitch.tv/alderongames/ to watch!). We also began crafting all of our audio from scratch and developing game mechanics in an effort to bring something new to the genre! 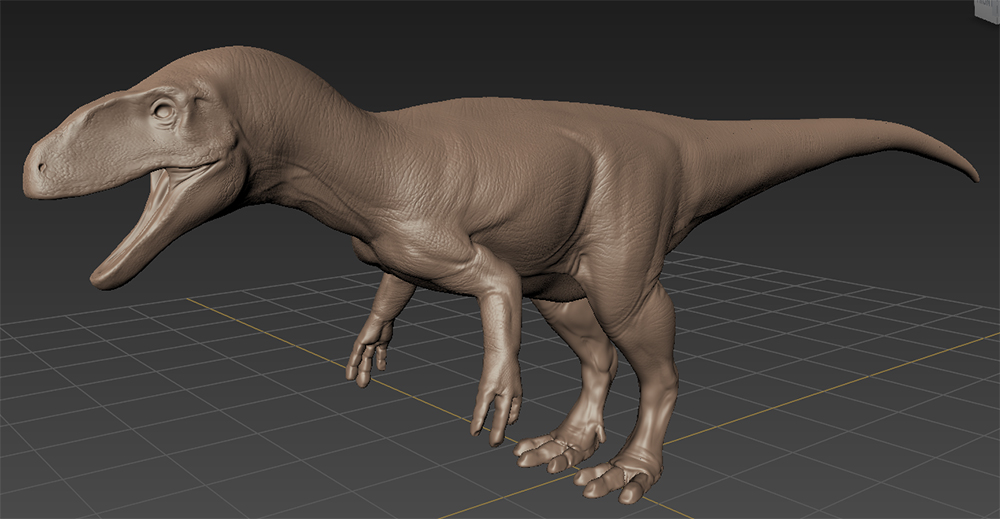 An early snapshot of our Allosaurus model in the middle of sculpting. It was the first dinosaur modelled for Path of Titans.

Nearly all large game projects use a file archiving method called “version control”, which allows developers to send their code changes to a central server that stores that particular change along with all previous changes ever committed. These files can be downloaded by any developer but they can never be outright deleted unless the physical server itself is destroyed, and even then the local copies on each developer’s system still exist. This provides extremely useful functionality, like being able to roll back the game to a previous version if a huge problem is discovered, restoring files if they were lost on any one developer’s computer, or restoring files deleted from the server itself.

Here on the Path of Titans team, we specifically we use TortoiseSVN for Apache Subversion. Like every other game project that uses version control, all of our developers have the ability to add changes to the server, but no individual person can permanently delete a file.However it is possible to remove a file from the game’s current build. For example, our animator Jiggy is able to delete an old animation from the game which you would then no longer see, but the file and all of its previous versions are still stored on the development server since it was first committed, and every other developer’s local system should the server be compromised or destroyed. At any given point she, or any other developer, could restore that file and you’d be able to see the animation in-game again.

Version control is very important to any individual or team that values their work, both old and current. Having the ability to simultaneously share work between team members effortlessly and have complete compressed backups of every commit we do is invaluable.

Lead developer Matthew Cassells (Deathlyrage) joined a project called “Smallands” as a contractor and helped lead a team of programmers and artists for several months. However due to disagreements between the project’s owner and the game’s publisher at that time, funding was pulled from the game and the project owner was no longer able to pay the team. Deathlyrage had to leave the project along with many other unpaid team members. The project was disbanded purely over financial disagreements with the previous publisher and has since been sold to a separate publisher.

With the incredible access we have to all types of media through the internet, plagiarism and stealing is becoming more and more of a problem for artists who share their work with people online. Some artists put large watermarks on their art, others only allow exclusive people to access it, and some simply allow their work to be reposted so long as credit is given to them as the original creator.

Due to the nature of creating, animating, and giving sounds to extinct creatures, it involves a lot of guesswork and having to draw inspiration from the animals we have today. This especially shows with creatures that have more direct analogues to modern creatures, such as the bird-like Latenivenatrix or the semi-aquatic and crocodile-like Suchomimus. All of our skin concepts are inspired by modern day animals and patterning, and from dinosaur pigmentation evidence such as countershading or striping.

An example of how modern day animals help inspire our dinosaur skins. This is based on an Australian Magpie, a bird that we hear and see nearly every morning here in Australia!

To show transparency with our community and ensure that they feel confident in our development abilities, our lead artist Rebecca Slater (Jiggy) actively streams much of her work through our Twitch channel (https://www.twitch.tv/alderongames). This includes dinosaur modelling, animations, skin painting, map work, setting up sounds, and more. This is all uploaded to our YouTube channel daily (https://www.youtube.com/c/PathofTitans). Our other skin artists also stream their skin painting when they are able to and are legally/contractually required to use only original materials and fully licensed, legitimate commercial software.

The Path of Titans team ensures that all artists create their art in fully licensed software and never use student versions or free trials to create content for the game. This includes software such as Substance Painter, Maya LT, Logic Pro, 3DS Max, 3D Coat, and many other tools that are essential to our production pipeline.

##Reading and Writing Code Things You Should Never Do, Part I

Why You Should (Almost) Never Rewrite Code – A Graphical Guide

Code can be very personal with many different possible avenues to accomplish the same end goals. It builds over time as testing reveals bugs, features are modified or changed, and additional functionality is added. Bug fixes and patches that accumulate over the life of the code can also introduce many additional variables that without proper knowledge transfer can be extremely time consuming to decipher and are often considered “messy” or “broken” by the developer that did not write them. It can be very appealing to simply “throw everything away and start over”, but the articles above explain the potential pitfalls that come with this approach and are the reasons why we are committing to maintaining and building upon our codebase so Path of Titans can always be moving forward. Should other developers take over managing our codebase, proper knowledge transfer will take place so that the continued building and maintenance can proceed uninterrupted.

We will be following an industry standard refund policy with full money back within a specified time window (TBD) and under a certain amount of gameplay hours. Known and trusted payment processing services will be used to handle all of this. We will also be following an industry standard regional pricing model to insure that prices in different areas of the world correctly reflect currency strength and local economies. Maintaining the ability for users to leave feedback and reviews is import from a consumer standpoint and will be supported in our launcher. Portals to social media, forums, and our website will be available as well.

The current environment surrounding Steam as a platform and the saturated atmosphere in which hundreds to thousands of games are released every week makes it very hard to be competitive as an indie project. We believe we can offer a better solution to the more common issues we’ve found with Steam over the years including issues with patching, end user license agreements surrounding modding content, and the overall cost of using the platform.

Additionally, the 30% revenue cut that Steam would normally take from sales can instead go back into the game’s development. We are also able to put money towards great causes such as charitable foundations as well as improving our community modding tools and hosting fun community events.