Hello everyone, we have an important announcement to make alongside our regular updates.

State of The Game and New Map Demo

While we have been working quickly developing Path of Titans, we have come to the conclusion that we will not be ready for Pre-Release access in time for December 2019. This is due to a number of reasons, including unexpected bugs and crashes taking large amounts of time to fix, our newly divided focus working on building and optimizing the game for other gaming platforms (that we can’t quite reveal yet!), and individuals on the dev team running into personal life events that take away from their available development time.

What this means is that we will be delaying the game release date and the Pre-Release Access date.

Release Date will be announced in Q2 2020

The combat and collision system we are working on for Path of Titans is rarely implemented in other MMOs and other dinosaur games. We believe that it’s extremely important for gameplay and we will continue to work on it, despite it being very hard to do. We are confident we will be able to build these systems, but it will be a big task!

That being said, some aspects of the Pre-Release will also come into the Demo early, and we still plan on updating the demo once a month.

As a way of saying thank you to everyone who has supported us for so long, we are releasing a new demo patch that allows you to run around as a Latenivenatrix and explore a portion of our map! Our map is very large, so we will be cycling through the available playable area over time so people can help report bugs and give feedback. This will be single player only, however we will be hosting multiplayer servers for this map demo at a later date so you can explore with your friends.

As always, we will remain absolutely transparent about everything we are working on and keep you in the loop through Discord announcements and our social media channels. We have also set up a public Trello game roadmap you can follow: https://trello.com/b/XoWe2llK/path-of-titans-roadmap

And, in addition, we have a roadmap for the Alderon Games Platform you can follow as well: https://trello.com/b/C5FXhzmH/alderon-games-platform-roadmap

Additionally, we have just hit a milestone of raising $200k USD, an incredible amount that we are extremely thankful for! Without your support, we would never have been able to do many of the things we have planned for Path of Titans.

Due to the delay of the Pre-Release, the crowdfunding on our store will remain up and will allow for additional stretch goals to be reached. Some stretch goals will be integrated into the new release date, such as nesting and dynamic growth, as we think they will significantly improve the game experience.

Thank you for your understanding, and if you have any feedback please let us know!

We have been working a lot this month on the movement system and improving on what we have already built. The main areas we are focusing on involve improving the player’s ability to control their character more precisely.

What we are internally calling the “precise” movement system is activated when the player holds down the right mouse button (or the corresponding button on their device), allowing them to turn in place, strafe, reverse, and inch forwards. This will give players significantly more control over their dinosaur, and will make it easier to maneuver around the environment. For example, accidentally running into a corner will be easy to reverse out of, and the ability to circle-strafe around your attackers will open up new combat strategies and opportunities.

This movement system is the foundational pillar of the combat and collision system, so it’s extremely important that we ensure it feels good to use and allows for the amount of freedom needed to make the game enjoyable to both play and control. 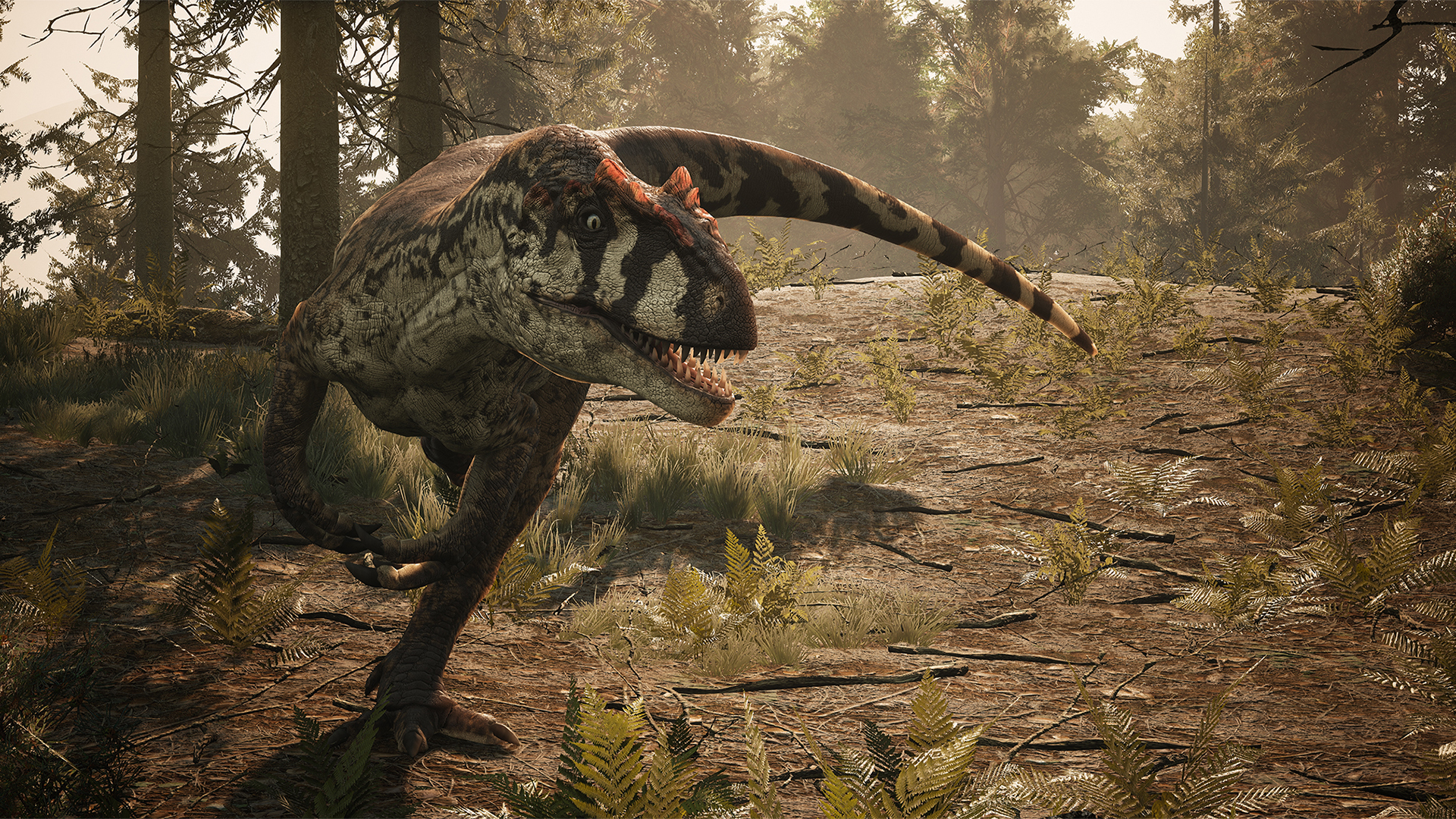 We’ve been working away as usual on the map, and have completed over 4 km squared so far. Each kilometer of the map is filled with rivers, caves, lakes, swamps, and other interesting environmental formations. We have dozens of development streams you can check out to see our development in real time: https://www.youtube.com/playlist?list=PLQGRVki0HUnVdkYsg2PpfJnFs3jdNfqk_

In addition to map development, we have just added in the particle system to really help bring the environment alive. This means that depending on the time of day and weather, different types of things will spawn around the player. Things like butterflies, dragonflies, and birds will fly around on calm days, and fireflies and moths will spawn during the night. Even smaller things like pollen and grass tufts will float by in the wind, really adding another dimension to the weather system.

We will be expanding on this system in the future to include more varied particles to further improve immersion and environmental interest. These particle effects are viewable in the newly released Map Demo, so you should definitely check it out! Thanks for reading!