Want to host your own community server? Read more here!

Hello everyone! We have just released our first iteration of community servers and modding. This video will break down these two new exciting features, and what it means for the future of Path of Titans. Let’s jump in!

Watch a video version of this dev blog below!

From the start, Path of Titans has been designed around modding. We have made all of our systems modular and editable, and with the amount of flexibility we provide, you will be able to create your own unique game changes. With modding released, we are essentially opening the floodgates to creativity and freedom!

Mods like the vast desert of The Grim Expanse, or the huge oceans of Cerulean Island are completely game-changing mod maps that allow for different playstyles and quests. 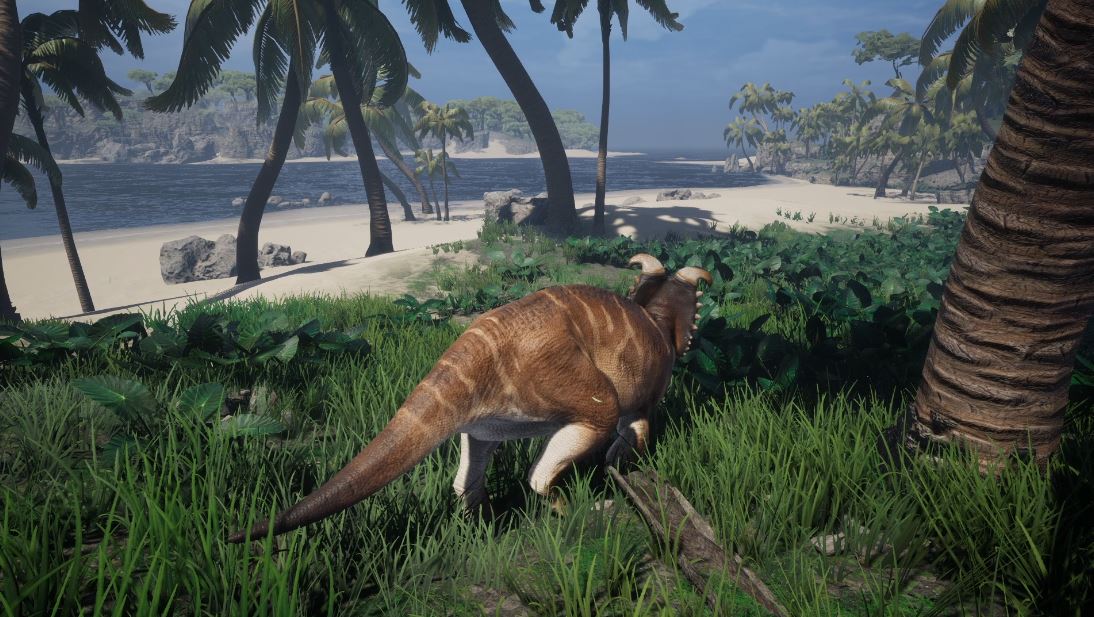 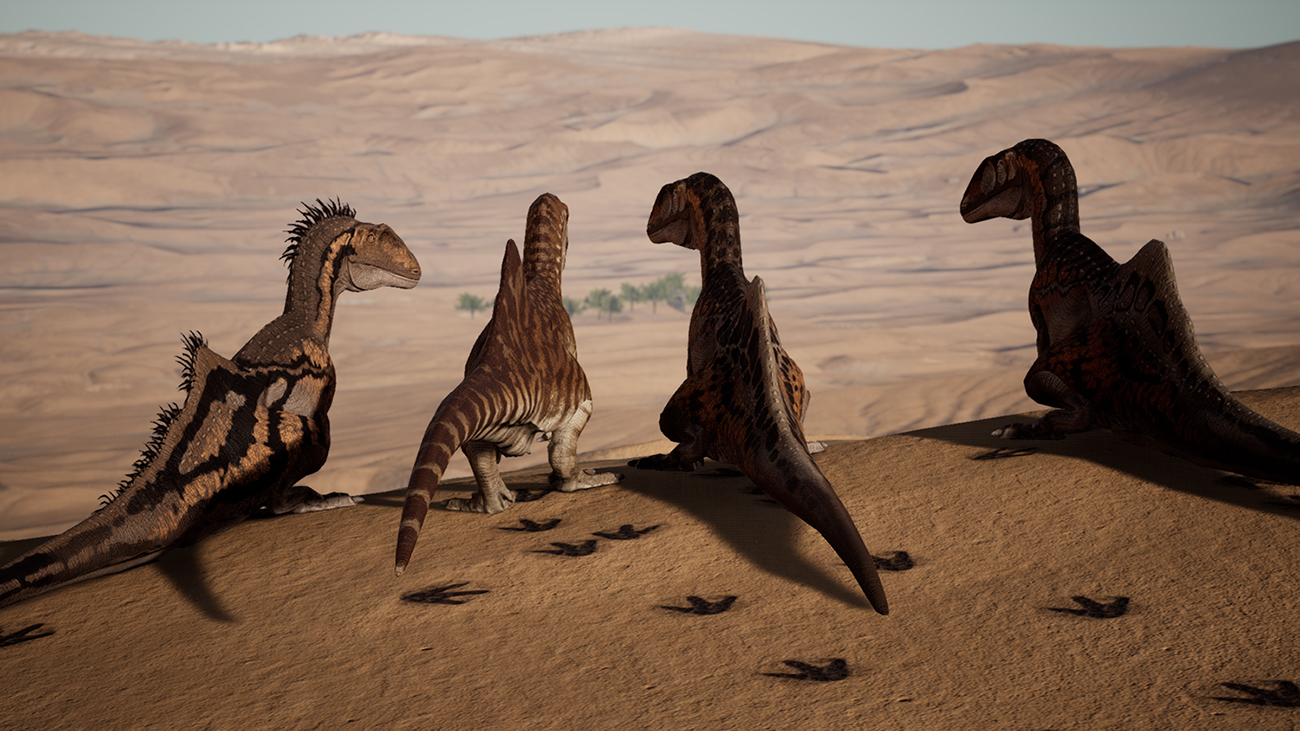 Modded creatures are possible as well, such as the tiny Playable Platyhystrix, or brand new ceratopsian Torosaurus. Get really creative and even add creatures that aren’t even prehistoric, like a German Shepherd dog! We cannot stress enough how open and flexible this modding system is for new creatures, and it can be leveraged even further post launch when we release fully aquatic and flying mechanics.

Note that not all mods are optimized for mobile platforms, so please be sure to check compatibility for your device! And while the Path of Titans dev kit is not yet publicly available, there are many modders working behind the scenes on new content, so keep an eye out for new mods released in the future! 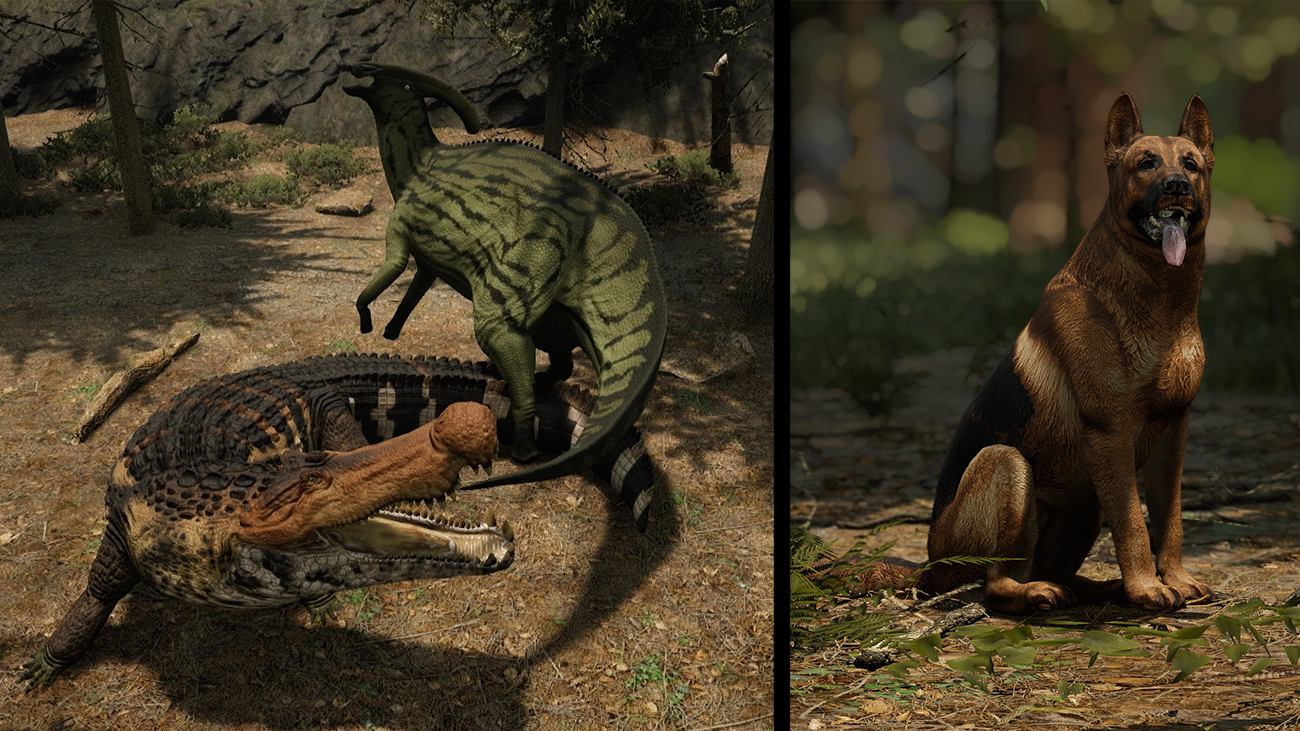 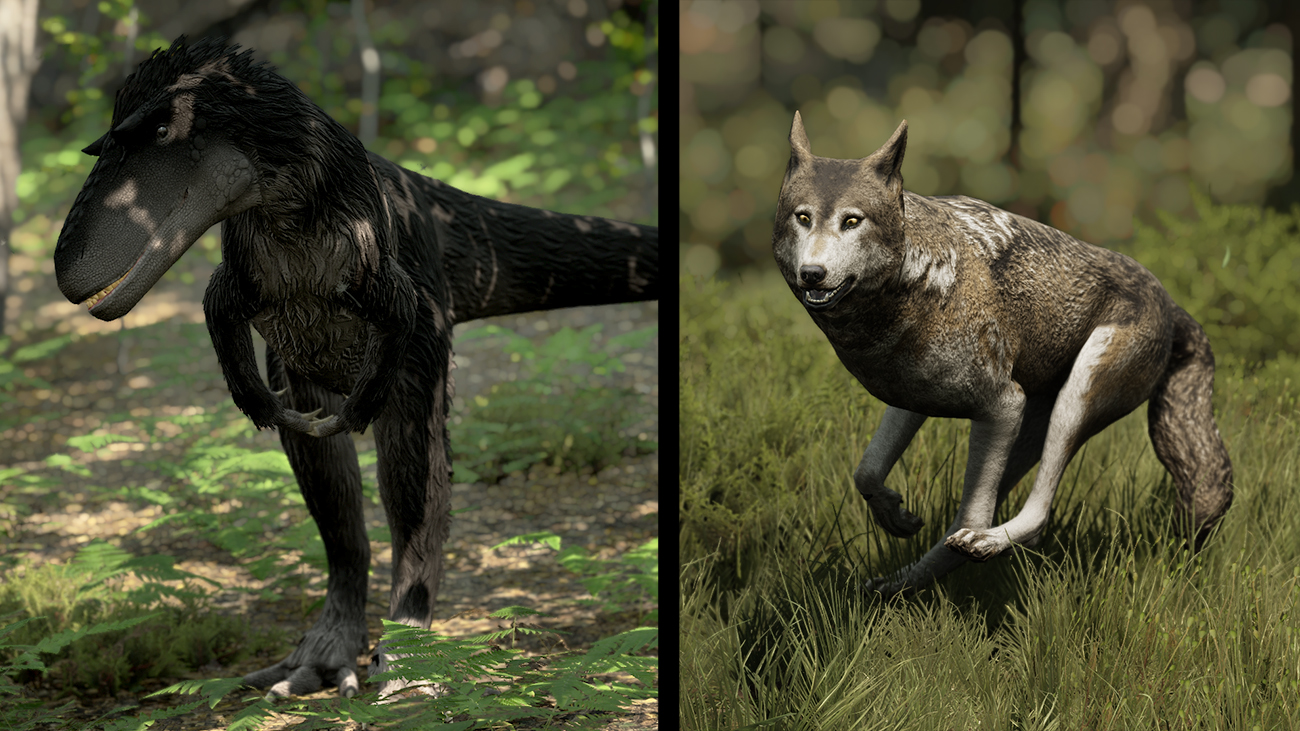 When it comes to actually modding the game, we have developed some extremely helpful tools and systems to make it as easy as possible for creators to get their mods into the players hands. Typically, modding can present several logistical issues such as mods becoming out of date, difficulties in installation, compatibility issues with your specific machine, and unfortunately many more. We wanted to take this into account in our efforts to be as mod friendly as possible, so our simple modding backend allows modders to upload their mod source files to our machines so they can be built for all of our supported platforms. This ensures both robust cross compatibility and ease of installation while removing the need for modders to physically own or develop on our entire list of supported devices. Your mod will also be tested, automatically rebuilt when we release updates, and hosted for you so players can download them on the fly.

Modding and community creativity is at the core of our vision for Path of Titans, and with this first modding release to the Path of Titans Demo, you’ll really start see what is possible with our platform!

We’ve introduced an update to our matchmaking system for official game servers. Instead of joining our servers from a server list, players now simply click “Multiplayer” and will join the server that’s the best fit for them. You can change your region in the settings menu if you prefer to join a particular region, and you can also join your friends directly through the friends list, bypassing the matchmaking system.

Matchmaking is a big step towards improving the overall game experience and preventing exploits. Because character saves are shared across all official servers, serving hopping was previously possible to exploit certain game mechanics, such as resource farming . With this matchmaking update, players will simply be returned to the same server if they attempt to switch. The matchmaking system also distributes players more evenly across regions, so you don’t have to settle for a poorer connection just to play on a populated server. 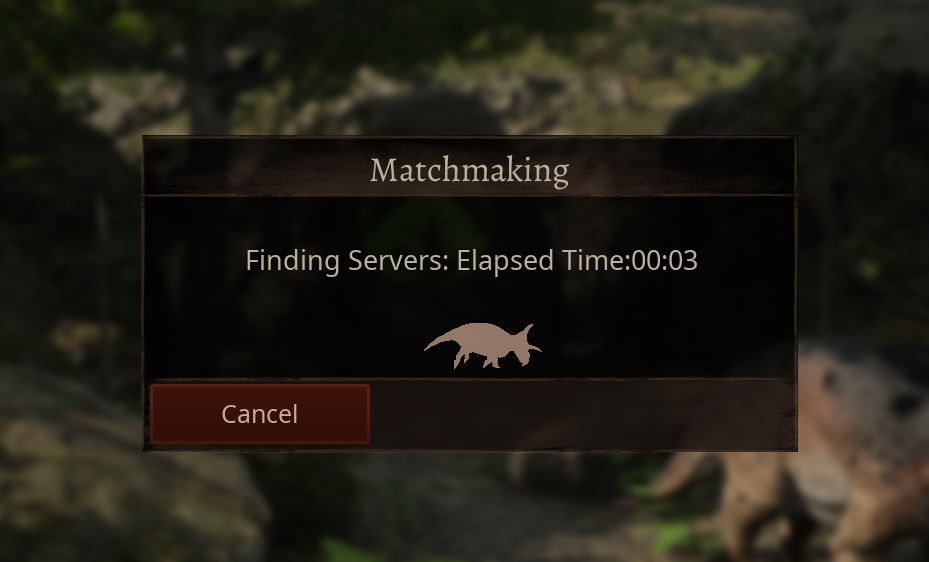 Our official servers are unique in that they do not have any particular gameplay rules, we have simply endeavored to design the game so it can’t be exploited or cause issues with the game balance while building our vision based around questing, home caves, and exploration. However this is merely our take on a dinosaur survival game. So with that being said...

If you as a player would like a different gameplay experience, we highly suggest taking a look at the newly released Community Servers found under the “Community Servers” tab. These servers are entirely community run, and are a completely different experience than our official game servers. Things like Dinosaur Deathmatch, hangout and chill, or Roleplay Realism are now possible through these custom servers! Be sure to read the local rules when you join these player-run servers and find the community that’s right for you!

We have put a huge amount of effort into making community servers the best they can be. With a huge suite of admin commands, moderation tools, and server settings, community owners can more easily customize their gameplay experience to suit their players. Options such as disabling certain dinosaurs, shutting off global and local chat, altering the water quality system, changing group slot sizes, turning off the map and minimap, and much more are all possible.

Community servers also have essential moderator tools, such as server password control, player whitelists, and more. Server admins can also fly around the map as a bird camera to spectate and help players in-game, or to execute certain roleplay or administrative actions. Server owners can also create custom levels of admin access, such as a “trial moderator” that only has access to basic teleporting commands, and a “senior moderator” with access to server restart controls and administrative tools. 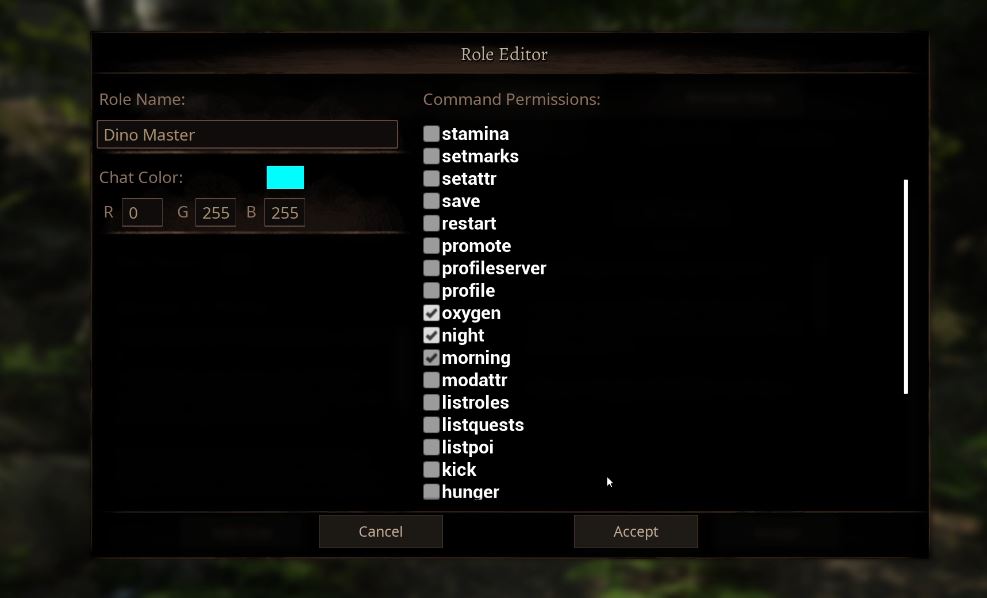 Speaking of server restarts, server admins will also have access to automated server restart settings that will warn players in-game ahead of planned restarts. This makes it a lot easier to maintain your server and perform updates when necessary.

Path of Titans also offers a server hiving system to link multiple servers together to create a shared database of player data, so players can jump between linked servers. This means communities with multiple servers can have cross-server character saves, just like the official servers, without the need for a complicated character data transfer system.

We also support Discord webhooks for in-game events, opening up huge automation possibilities for server owners. Your server can report on commands that have been executed on the server, bans and player activity, and can even leverage the in-game report system to automatically receive live player reports without the need for additional reporting tools like a webform or player report email.

Server owners also have access to anticheat tools and BattlEye RCON to keep their servers safe, removing the need to spend time manually tracking down possible hackers. We also prevent duplicate servers and server impersonation in the server selection list, so players will not have issues finding your server in-game.

Server owners can set local rules and the Message of The Day, so players can read and agree to your requirements prior to character creation. Modding can also allow for custom rules to be created that would otherwise have to be manually enforced. For example, if a realism community server wanted a rule requiring players to use an aggressive call before attacking other players, that entire functionality could be modded into the game. This amount of freedom means admins can spend less time moderating and more time creating and hosting cool community events or simply shaping their version of Path of Titans! 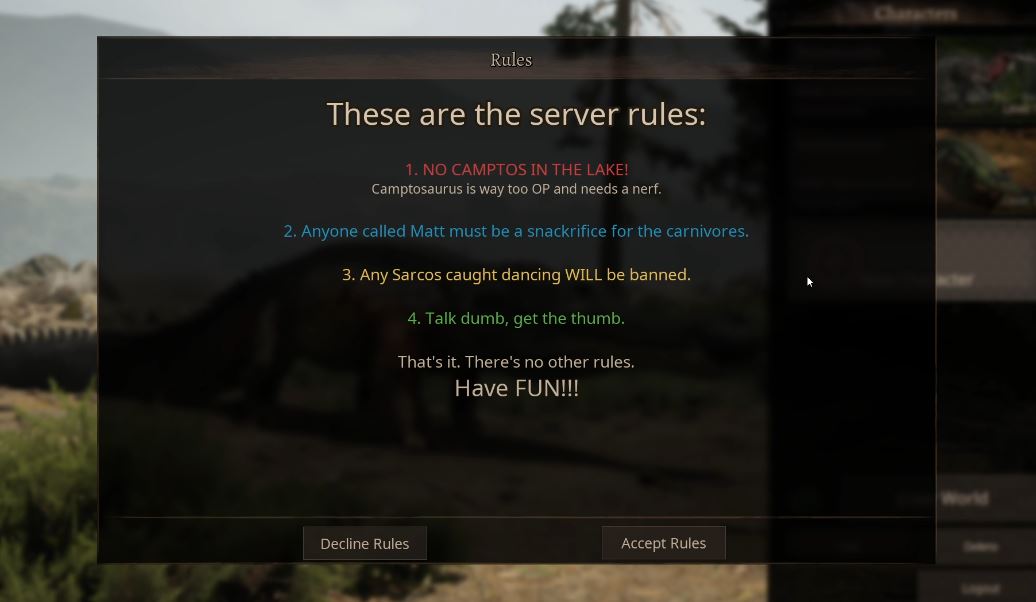 Our team is very open to developing and improving community features, and we are actively working with the community on creating new tools, improving existing systems, and of course bug fixing.

Both modding and community servers are still in active development, so help us out by reporting any bugs or issues you may find! As always, thanks for your support, and we hope you enjoy this update! Thanks for reading!