In this post we will talk about our Alderon Games launcher, and the reasons behind our decision to create our own launcher instead of using other platforms such as Steam or the Epic Games Store. 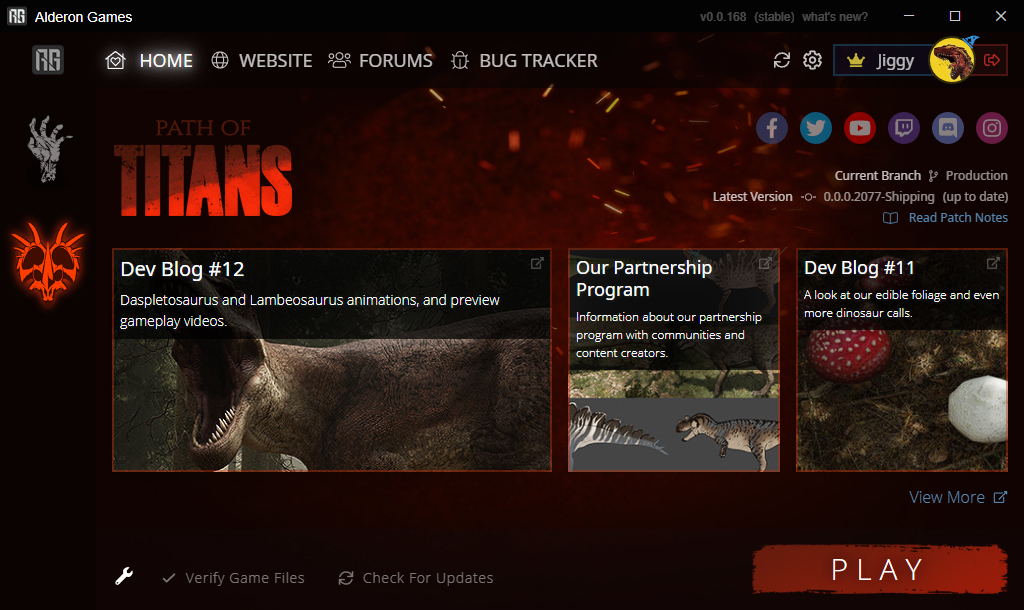 A screenshot of our launcher in its current state. While still under heavy development, you are able to change download settings, view news and patch notes, visit the forums, and of course, download and patch the game.

Nearly every member of the Path of Titans team first began their game developer journey as modders and, to us, modding is one of the most essential aspects of our game. A positive and thriving modding communities survives through three key features: easy to use tools with clear documentation, an easy way to distribute their mods, and the security they need in order to protect their creative works.

Our dev kit and modding tools will be available to the public alongside the game at launch. With extensive documentation and help to guide modders, anyone will be able to download our dev kit and begin creating. We will also help foster a friendly and helpful modding community through our forums and other avenues. Things like tutorial videos, example mod files, and mechanic documentation will help modders get a handle on the nuances of the Path of Titans game, and will allow for nearly limitless creative freedom!

Once a modder has created their mod, another difficulty they face is distributing their mods to their fans and allowing their creations to be rated, be given feedback, and to update their mods as they continue to work on them. We currently have a backend created that will allow modders to simply upload their packaged mod to our servers and we will rebuild it for all other operating systems, such as Mac or Linux, so anyone is able to play regardless of their device.

Our work in progress cloud cooker interface, built by Pathos, that will allow modders to upload their work and let us build their mods for other operating systems.

Often there are hidden terms of use that accompany uploading mod content to certain platforms that hinder or remove modders right to their work, even if it was a completely unique mod item that was created entirely by themselves. Because all Path of Titans mods will be distributed within our launcher and mod deployment backend, we can give modders a fair and empowering terms of service to agree to that won’t ever cause them to second guess their decision to upload their mods to our platform.

Path of Titans is a cross-platform game, where PC, Mac, Linux, Android, and iOS/iPad OS can play all on the same servers at the same time. This means that in order to play together, they must all be on the same game version and must download game patches at the same time. This is one of the most important reasons we opted to create our own launcher and patch deployment backend, because it allows us to have exact control over when game patches are deployed and servers are updated.

If we were to rely on other platforms, we would be limited by the speed at which those platforms deploy their patches. This also means every patch would have to be sent through each platforms approval process, which can take weeks depending on the service. The worst thing that can happen to a cross-platform game is for every platform to be on different versions, meaning most of the playerbase wouldn’t be able to even join a server to play multiplayer.

In addition to having exact control over when patches are deployed, we are also able to use more intelligent patching methods than traditional systems. We use a game patching method called “delta patching” that scans the patch and determines where changes were actually made within the game files. It then downloads only those modified files and patches them into your game. This means that most updates will be exceptionally small and will be very fast to download and install.

A work-in-progress shot of Pangea Insula, a map mod being developed by Ethos, a Path of Titans modder.

We know that many people do not like the idea of downloading another launcher. It can be cumbersome and inconvenient if not done correctly and it may feel less “secure” than something from a larger, more established studio or company. We weighed all of these concerns and others when making this choice and the bottom line for us was the importance of functional and ethical mod support and the ability to handle updates in a much more clear and user friendly way. Our launcher is lightweight and easy to install/uninstall and we will be committed to maintaining and improving it as time goes on.

This does not preclude the possibility of launching on other platforms in the future should that make sense for development, but for now this is our plan for the immediate future. Thank you for reading!