Hello everyone! In this post we’ll be talking about the progress we’ve made on Path of Titans so far, what we’re working on next, and announcing our Pre-Release date!

We have determined that we will be able to open Pre-Release Late September 2020!

This means we will have a playable game with multiplayer servers and many of the core mechanics of the game completed at that time. We will be developing the game in tandem with the pre-release, so new features will be added to the pre-release as well over time.

The exact numerical day within September will be announced closer to September because it’s a little too early to know exactly which day everything will be ready.

We will still be releasing monthly demo updates as per usual, and will always be posting our dev blogs and update videos like this to help keep everyone in the loop with development.

It’s been 8 months since our crowdfunding campaign ended, and since then we’ve been working ‘round the clock developing Path of Titans. While there are always challenges to overcome and unforeseen setbacks, we’ve put our heads down and been focused on making this game a reality 100%.

We have nearly completed our first pass over our map, named Panjura. It is 8km squared in size, and features 4 main biome types: Redwoods, Pine Forests, Grasslands, and Beech forests. There are also other smaller biomes types like rocky crags and swamps.

On Panjura, players will find loads of interesting water bodies, and rivers and waterfalls that connect them. There are also caves and sinkholes to explore, and we have many more plans for other interesting landmarks coming in the very near future. 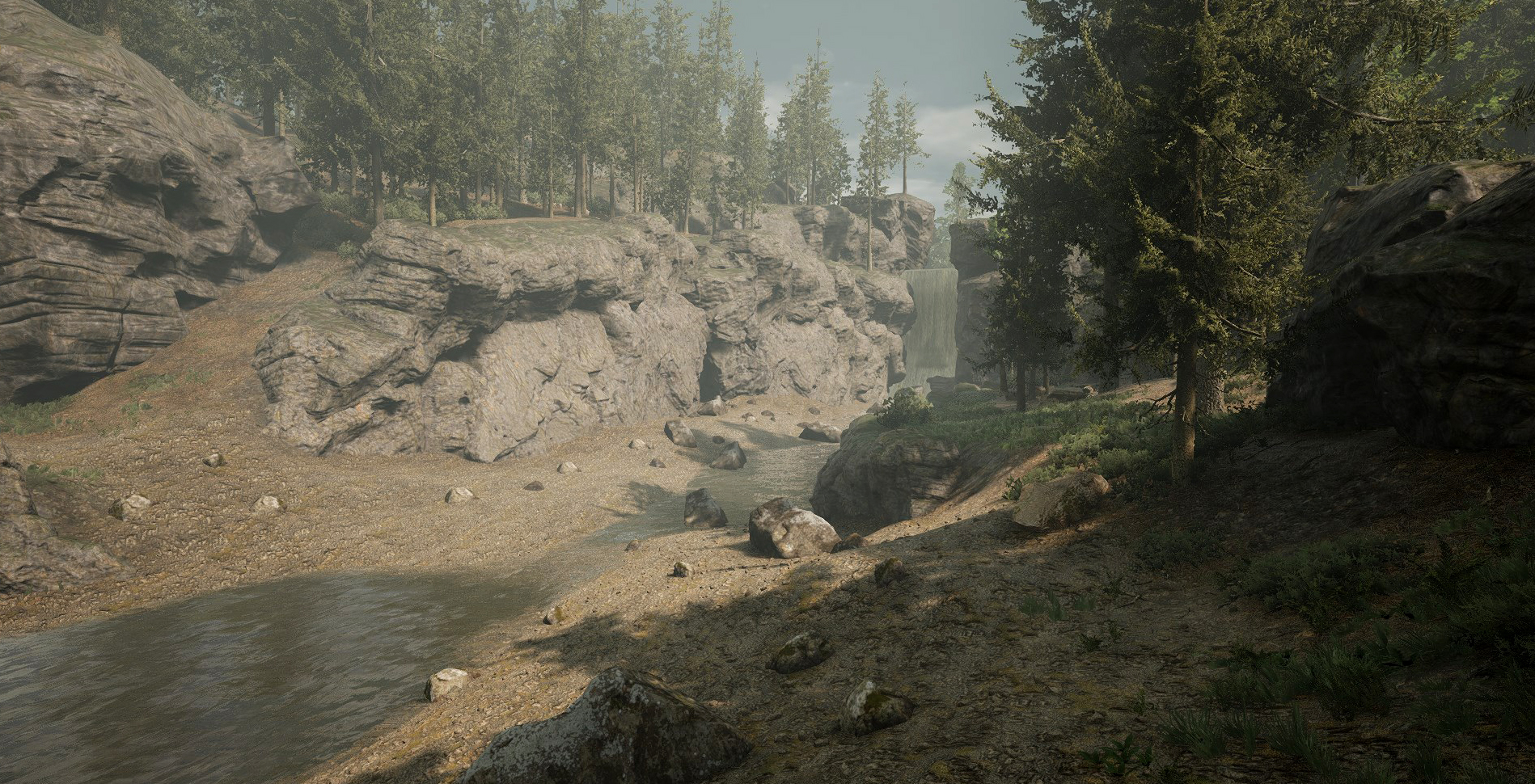 We started the crowdfunding campaign with 10 dinosaurs modelled, and thanks to some generous individuals, we were able to raise the funds to add 8 additional dinosaurs to the game. Since then, all of these have been modelled, textured, rigged, and added to the game, with most also having their subspecies models completed as well. Some are even playable in our demo right now like the Deinonychus and Concavenator. 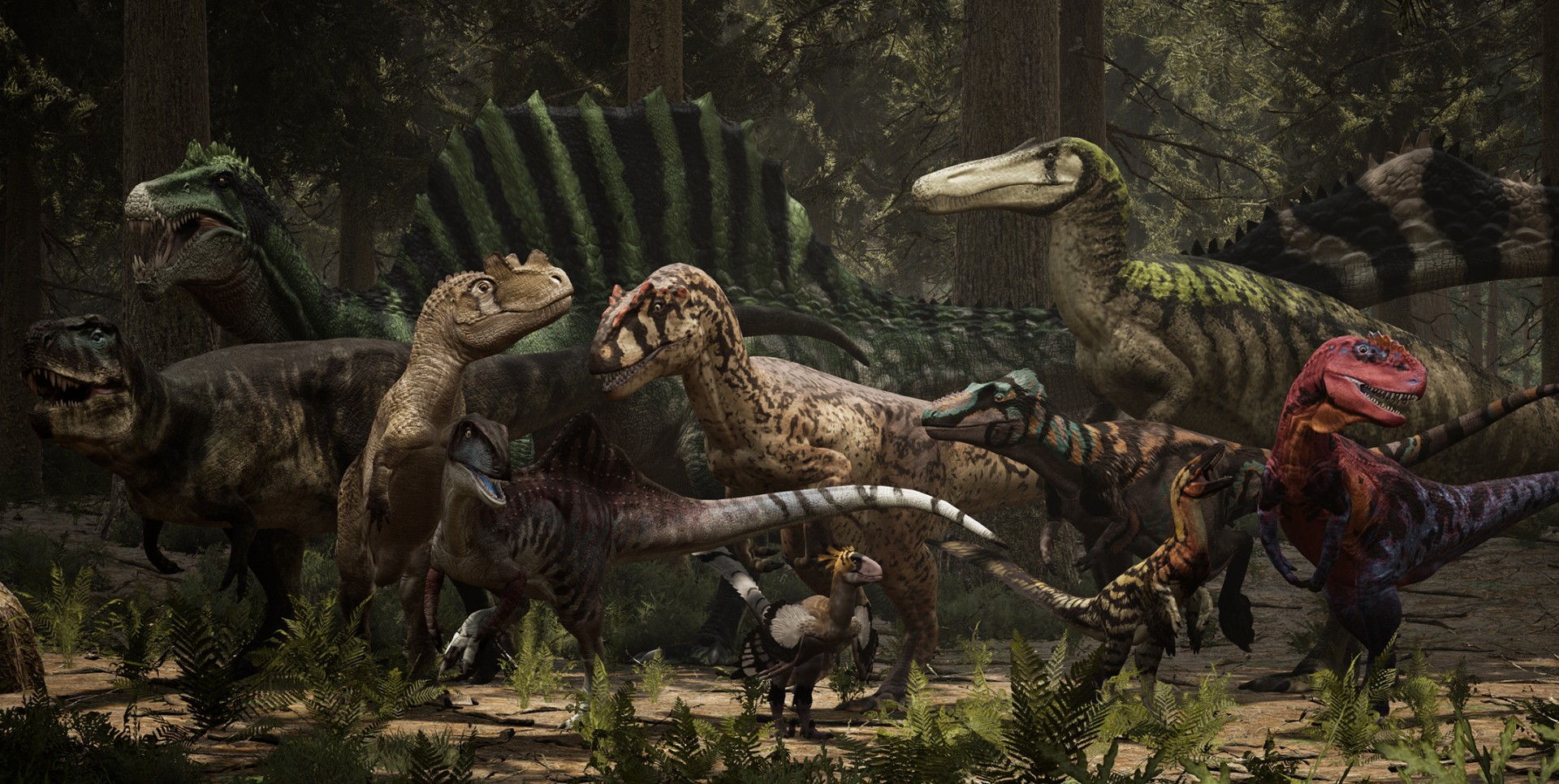 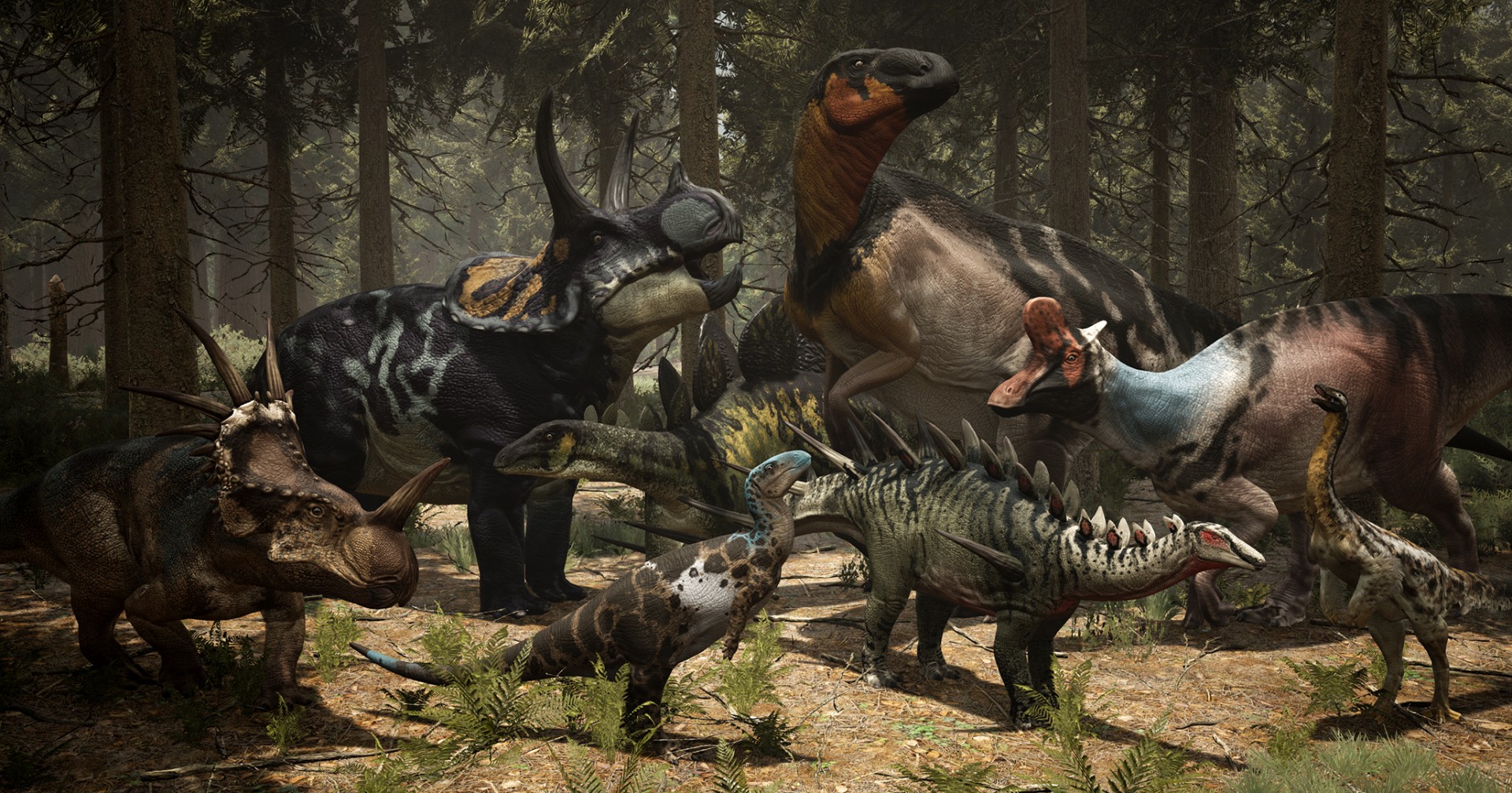 We have completed over 1000 dinosaur animations so far, and there are quite a few more to do. These range from walking, crouching, eating, sprinting, and more. Some of our favourite animations are the emotes that players can use to communicate with other people and AI. All dinosaurs have shake emotes, stretching emotes, and other flavour emotes like scratching and looking around.

We created our own day/night cycle system that has a dynamic time of day, and also includes weather like sunny days, rain, fog, and clouds. There are also environmental particle effects that surround you depending on the type of weather, like leaves and grass blowing during windy days, and fireflies glowing at night. Your dinosaur also will get wet when it rains! 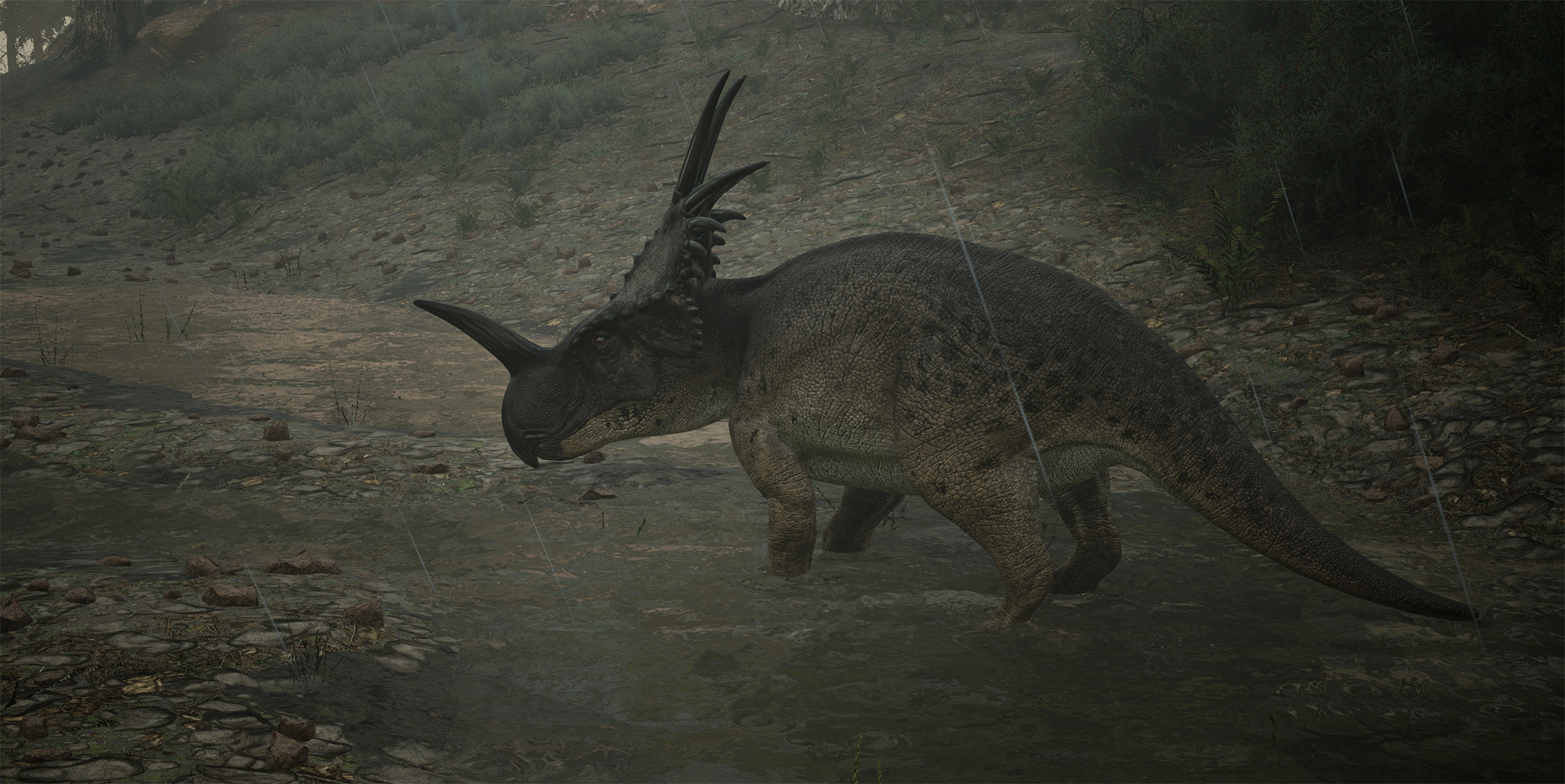 We have been working on expanding our movement system with sidestepping, reversing, and turning in place. While the system isn’t entirely complete yet and still needs bug fixes and improvements, it’s coming along nicely. We feel that getting this right will be really important in making our combat system feel snappy and fair.

Swimming was something that tied into the improved movement system, and is now essentially complete, with only a few bug fixes remaining. Players can swim at the surface of the water or they can dive underwater and swim in a way that feels natural and fluid.

We are also nearly finished with our fish AI as well. Fish will run away from a player when they detect movement- so a player will have to stay very still and wait for the fish to wander close enough to strike. Fish also are paired with an overfishing mechanic that will punish players who overfish a lake without leaving enough fish to repopulate that body of water.

We have nearly completed the entire sound set for our dinosaurs and critters for Path of Titans. This includes different calls types like aggressiveness, friendliness, alertness, and more. Additionally, there’s other foley sounds that have been recorded and added into the game, like footsteps, flesh tearing, swimming, digging, breathing, and other sounds that will really bring the environment to life.

Part of keeping the game fun and fresh means that we need things for players to work towards. We have implemented a quest system that gives players a certain kind of task to complete, like exploring or gathering. When they complete a quest, they will earn marks that can be used to unlock skins and colours. All quest progress is saved, so you can log in later to finish your quests without having to restart. We feel this will be especially useful for mobile players who might want to play for just a few minutes at a time. 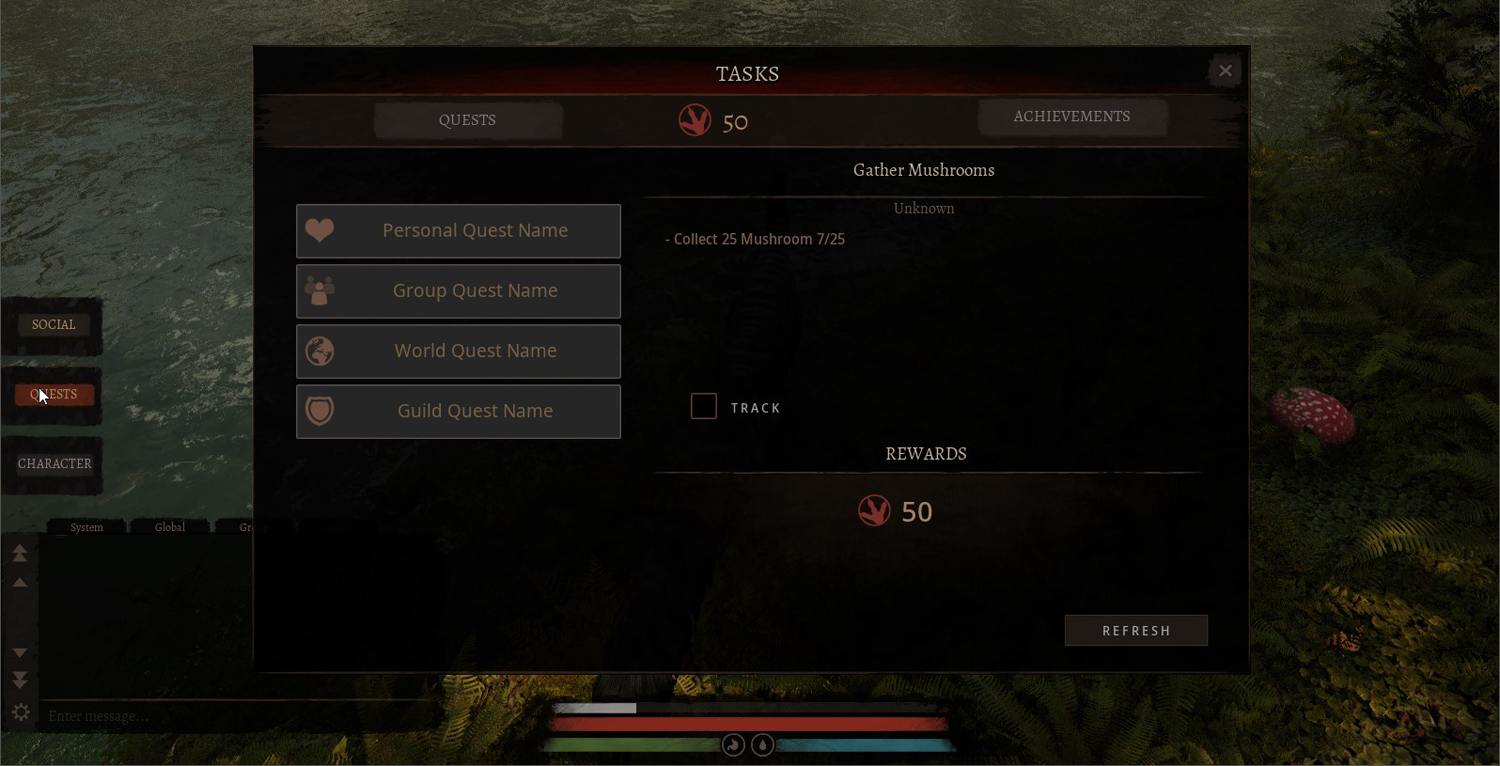 We have completed over 180 skins for Path of Titans as of this video. There are at least 9 skins per dinosaur, however some dinosaurs have a few extra. All of these skins can be unlocked through gameplay by completing quests and achievements. Skin rarity can vary from Common to Legendary depending on how hard they are to unlock. 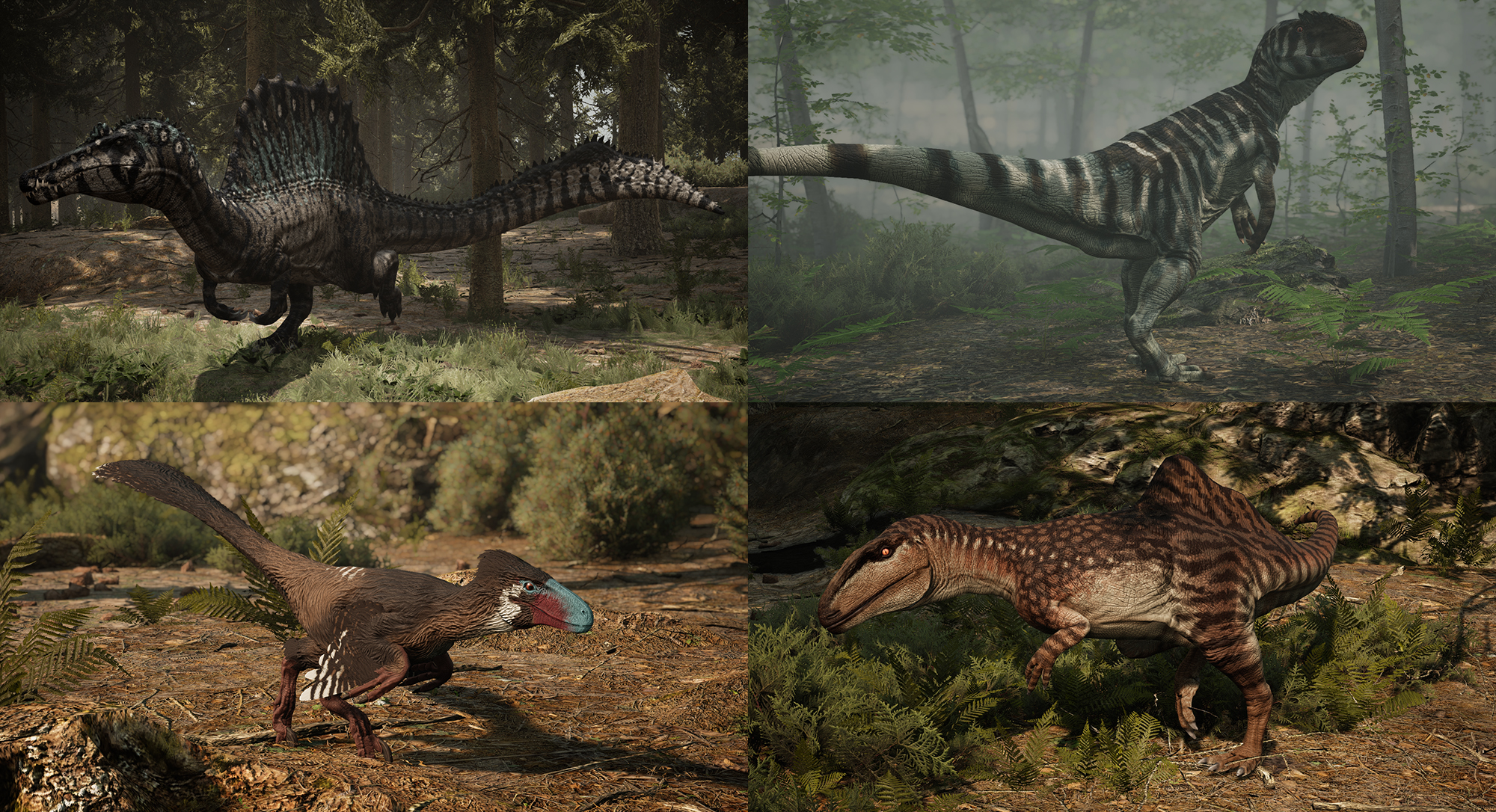 We have also completed the character editing system, allowing for players to edit their existing character to apply a new skin, skin colour, or even change their dinosaur subspecies. Players also aren’t limited to having only one character per server, and can have multiple characters saved even if they are of the same species. 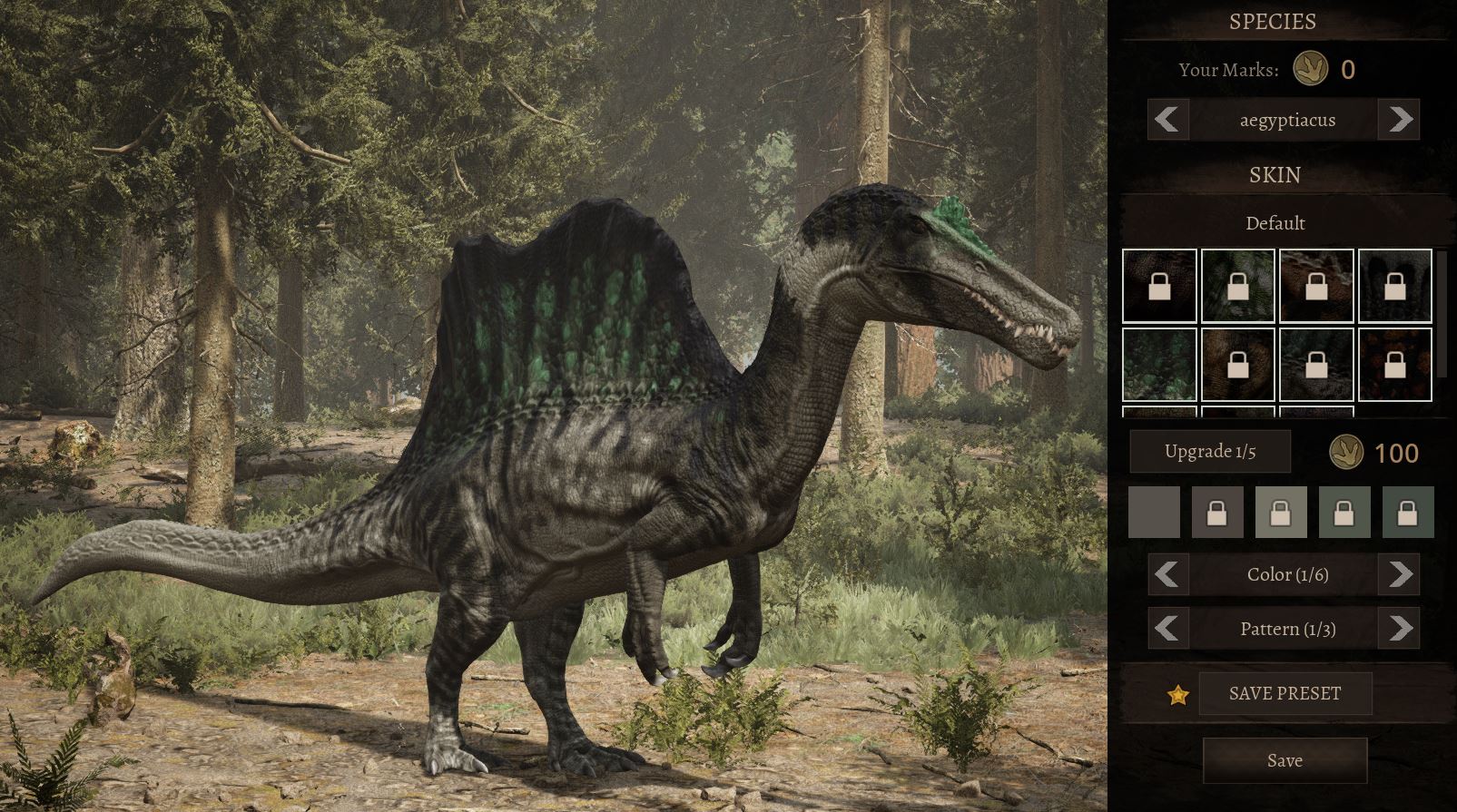 Even though completing all these tasks is difficult enough just for Windows, Mac, and Linux, we have still been working on making sure the game is compatible for iOS and Android as well. This means putting a big emphasis on scalability and optimization, and lots of toggles that we set depending on the operating system and power of the device the game is being played on. This is a great benefit for low-end PCs as well, as they can use all the optimization and savings that we introduce into the mobile version of the game.

All of these features We’ve listed are in addition to the other features that were already completed when we first launched our crowdfunding campaign, such as the homecave system, the waystone, grouping up into parties, and more.

There’s also been hundreds and hundreds of hours put into things behind the scenes that aren’t directly related to Path of Titans, like building a patch deployment infrastructure, developing our game launcher, fixing thousands of bugs, and even things like making this video!

We are currently focusing on completing our fishing mechanics and pushing out a fishing demo for our supporters to test, as we know that’s been a highly anticipated feature from the community.

Additionally, we will be doing a second working pass over our map, Panjura, to add extra details, place quest items, and fix any bugs we discover. We still have more animations to complete for our dinosaurs, like combat and hurt animations, and the combat system in general is being worked on.

Working on Path of Titans has been an amazing experience for the team, and the amount of community support we’ve seen is incredible! We are working hard every day to get the game completed so we can finally see the day where everyone can enjoy playing as these amazing prehistoric creatures.

Be sure to join our Discord if you have any questions or would like to see what we’re up to on a daily basis! https://discord.pathoftitans.com

Thank you so much for reading this update, and We wanted to personally wish everyone the best of safety during this difficult time we are all facing. See you next time, and take care!