Hello everyone! This week, we're covering some of the things we've been working on, and giving a sneak peek at some of the upcoming additions to Gondwa, including new ocean biomes and caves! Continue reading to learn more.

There are some significant improvements to the swimming system coming down the line for Path of Titans. The upcoming island map, Gondwa, is covered with vast oceans and river systems, and we will be putting an emphasis on fun and dynamic underwater gameplay. This means making a number of improvements to our aquatic creatures and the mechanics they interact with.

The current swimming system keeps your dinosaur level with the surface unless the player presses either the raise or lower button. This system works for creatures like the Sarcosuchus, which work well floating just below the surface, ready to ambush nearby creatures on the shore. However this system does not allow for precise movement, and can feel limiting on certain input devices.

Some of our planned improvements include...

The swimming system is being updated to include the ability to strafe, reverse, turn in place, and most importantly, when swimming, your dinosaur will follow the direction your camera points.

In addition to the swimming control improvements, we are also improving some of the systems related to swimming. For example, dropping items will no longer snap them to the ground below and they will instead slowly float to the surface. Things like swallowing food, eating, collecting quest items, and more will also be streamlined and less difficult to navigate underwater.

The aquatic audio system will be updated to take into account when sounds are heard underwater versus on land. If a call is played underwater, all creatures will hear it as being muffled. This means that aquatic creatures attempting to sneak up on prey on land won’t have to worry about being heard crystal clear by the land creature.

The emote wheel will soon also be able to be used underwater, such as playing vocal calls and using emotes. When calls are played underwater, they will be muffled and bubbles will blow from the dinosaur’s mouth.

Gondwa’s oceans are being updated! Get ready to explore new biomes and new points of interest. Similar to the dry lands, each area will have unique quests and quest items, and plenty of things to explore for aquatic dinosaurs. Some of our planned biomes include...

Kelp forests act like an undersea forest, with aquatic plants towering above, and mossy rocks below.

How will aquatic creatures find fish and food?

While fish may be plentiful in the dense biomes of kelp forests and ocean grasslands, it may be difficult to find them out on the open ocean. Instead, floating just at the surface, you will find bits of debris washed out from the shore including logs, kelp, seaweed, and branches. Fish will gather just underneath and swim around these floating islands. Fishers should be on the lookout for anything on the horizon, as branches and leaves can stick up out of the ocean waves at a distance.

There are more than just debris to be found, however! Carnivores can swim out to the oceans to feed on floating corpses of sharks and dinosaurs, too. Be sure to explore and see what else you may discover on the open ocean!

Gondwa is also being populated with a number of small burrow-like caves that allow for smaller creatures to escape into. Filled with roots, dirt, pebbles, and small sleeping mounds, baby dinosaurs and smaller species will enjoy seeking refuge in these secretive locations. 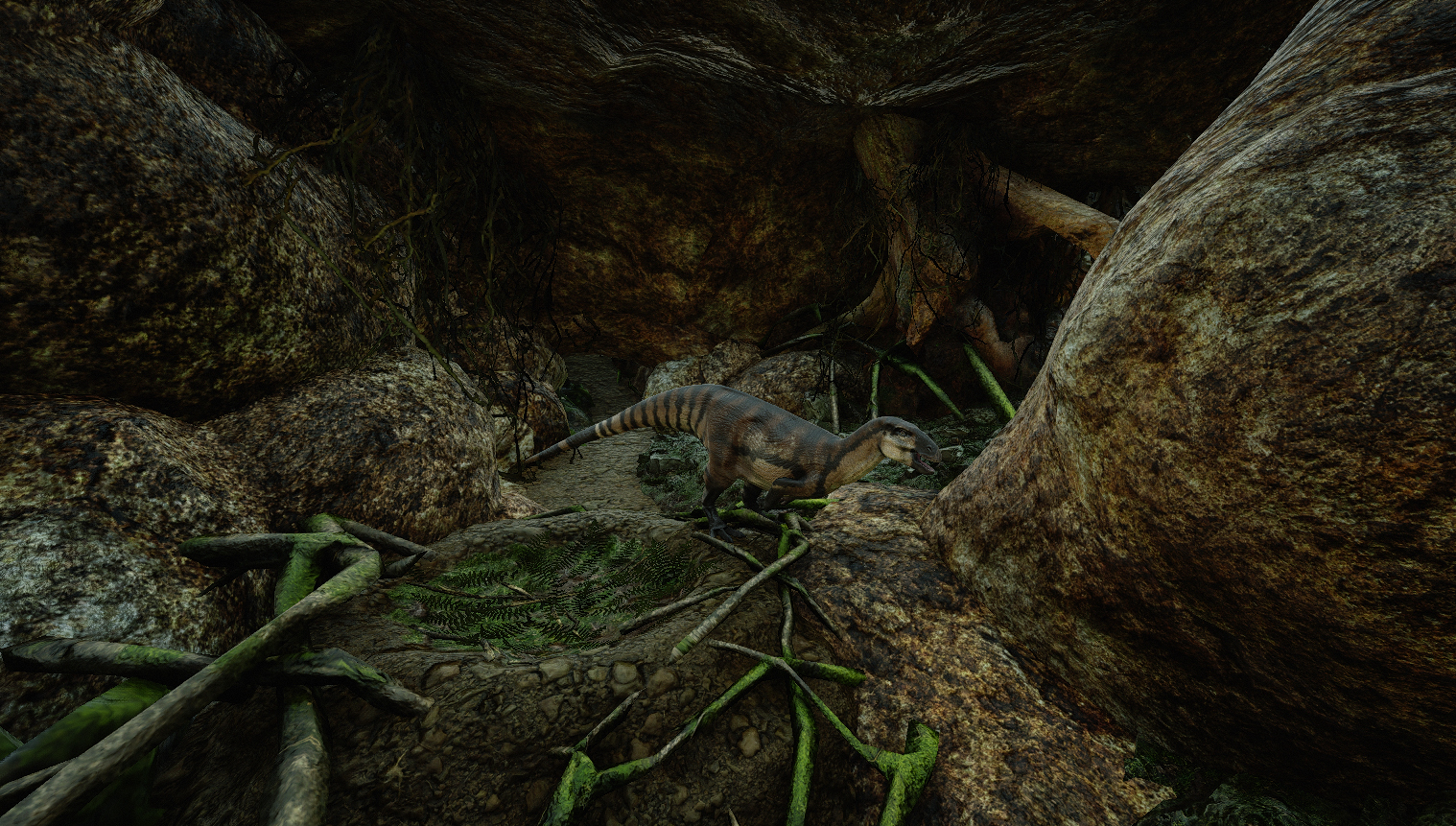 And, of course, larger caves as well!

A safety system around the entrances of Home Caves has been added to prevent being unfairly killed when entering and exiting your home cave. Additionally, there is a notification upon exiting your home cave that lets you know if there are creatures near the exit on the other side. This way, you can choose to only exit when you feel you are prepared.

Server optimization and performance has been improved to tackle some of the rubberbanding issues that happened on heavily populated servers. Through a number of fixes, we have solved many of the issues previously causing lag or snappy movement. This is expected to be a long term task we continually work towards as we move onward with development, as we must optimize when new features and content is added, eventually moving towards our goal of 200 players per server with Dinosaur AI.

A number of improvements have been made to downloading and using mods for Path of Titans. There is a new Free Space / Space Used indicator found on the mod download screen that lets players know how much space they have free to download mods. We have also made big improvements to the reliability of downloading mods, and better optimized the amount of space mods fill. This overall contributes to a better mod experience, and makes it easier than ever to hop onto modded community servers to experience some amazing community creations! Thanks for reading, and we hope you'll soon enjoy these features coming down the line! 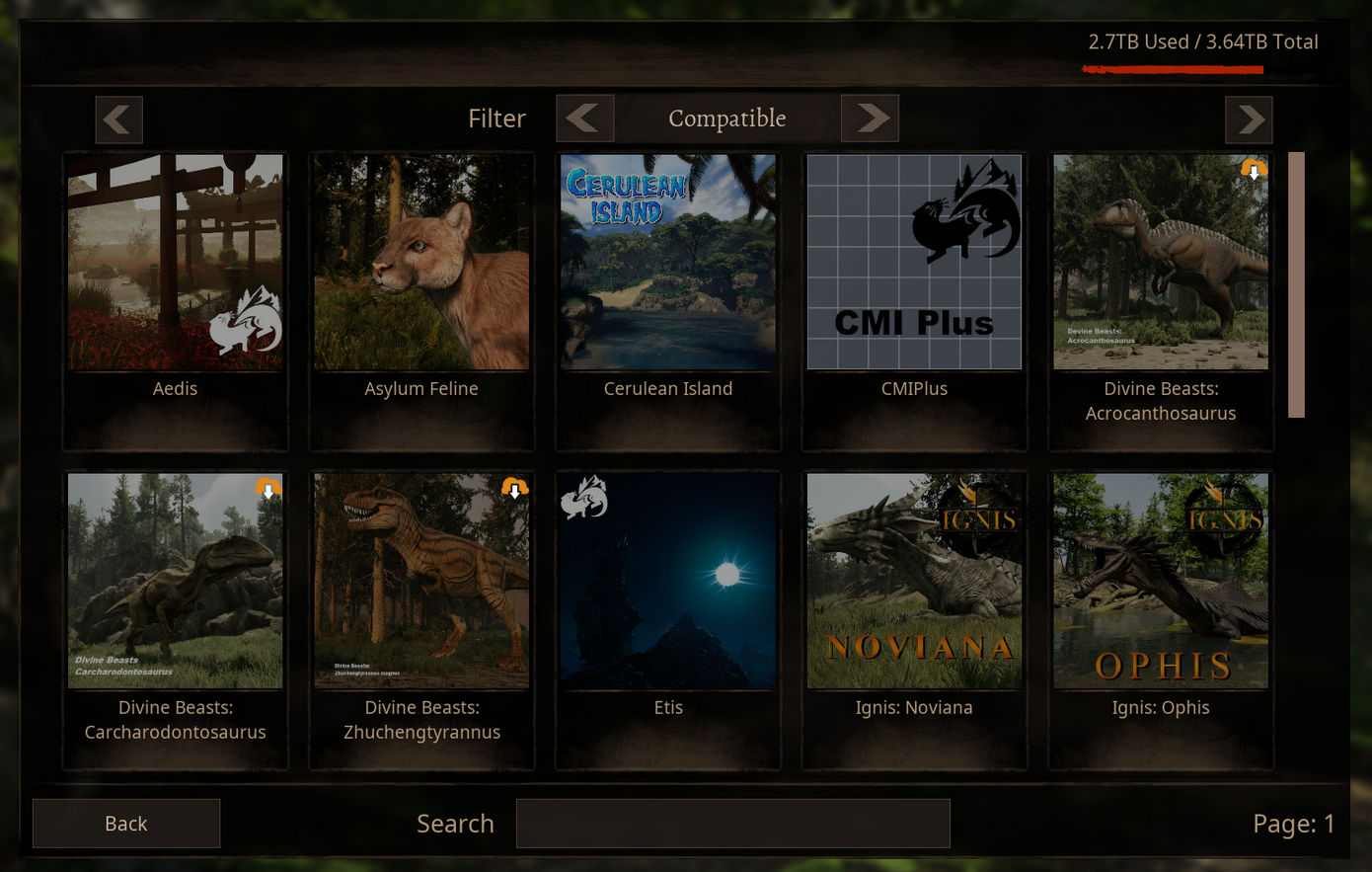